Where In The Hell Is The Lavender House: The Longmont Potion Castle Story 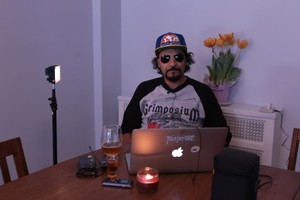 Two filmmakers attempt to make a documentary about an anonymous phone-work artist called Longmont Potion Castle who's been releasing albums of surreal and hilarious pranks for over 30 years. In spite of a semi-successful crowdfunding campaign and the involvement of celebrity fans, the filmmakers succumb to their own infighting and bad luck leaving an unpaid camera operator to finish the film. This is the fully authorized and official story of the legendary anonymous prank-caller; a dude from Denver, Colorado who picked up the telephone in the '80s, hit record on his parents' answering machine and dialed a number, which unknowingly launched the career of comedic persona non grata and touch-tone folk hero Longmont Potion Castle aka LPC.

DIRECTOR'S BIO
Thomas Rotenberg is a Producer, Writer and Director known for his short films and his first documentary feature WHERE IN THE HELL IS THE LAVENDER HOUSE: THE LONGMONT POTION CASTLE STORY.

DIRECTOR'S BIO
David Hall is a director and writer, known for his first feature film: WHERE IN THE HELL IS THE LAVENDER HOUSE: THE LONGMONT POTION CASTLE STORY).

"A delightful refresher and breakdown of LPC’s 30 years of work."